The Apocryphon of John pdf free download. Originally two volumes had been planned for the Apocryphon of John in the Coptic Gnostic Library edition in the Nag Hammadi Studies series. Frederik Wisse was to prepare a synoptic edition of NHC 11,1 and Vf, I, the two witnesses to the Coptic translation of the longer Greek version. Michael Waldstein took over from Peter Nagel the task of preparing a synoptic edition of NHC 111,1 and BG 8502,2, the two independent Coptic translations of the shorter Greek version. In 1992, however, it was decided to produce a single synopsis of all four texts with Wisse and Waldstein as co-editors sharing responsibility for the whole volume.

The Apocryphon of John pdf 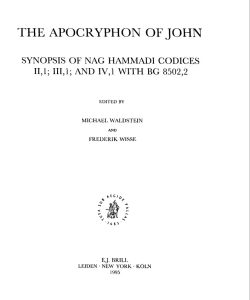